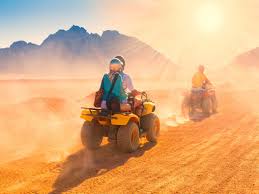 Egypt’s current political border assumes the form of a square that occupies one million square kilometers; 94 percent of this area is hostile desert. The Nile valley splits this territory from north to south for as long as 100km. There are three deserts in Egypt: the Sinai Desert, the Eastern Desert, and the Western Desert . The Western Desert of Egypt is a part of the greater Libyan Desert , which totals 1500000 sq km. The Libyan Desert has the triangular shape of the Indian sub- continent. It constitutes the land west of the River Nile with five major oasis: Kharga, Dakhla, Farafra, Baharyia and Siwa. To the south it is bounded by the El Fasher, and the Sarra triangle and to the west by the Fezzan area. The center of it lies at the majestic Mountains of the Uwienate, Arkenu and Kissu. The heart of it is the Gilf Al Kebir plateau, a huge black shelf , almost the size of Switzerland. The major towns or oasis in the Libyan Desert are Kufra, in present day Libya, Dakhla, Kharga and Siwa.

Scattered remains of Ancient Egypt and Greco-Roman periods provide evidence that the large Egyptian oases Baharya, Farafra, Dakhla and Kharga were inhabited since ancient times. In medieval times one of the major African trade routes crossed the eastern Libyan Desert starting from Darfur in Sudan to the Kharga oasis ending in Assiut on the Nile. The caravan route is known as ‘Darb el Arbain’. Each year slave caravans started off with as much as 80 thousand unfortunates on the forty days march and usually no more than 20 000 reached Assiut and the slave markets of the middle east. The mortality rate was similarly high among the camels, and to this day the route of Darb el Arbain is marked with white bones of camels, and occasionally human skeletons.

THE LOST OASIS OF ZERZURA
An anonymous 15th-century Arabic treasure-hunters’ guide, Kitab al-Konuz, “The Book of Hidden Pearls”, describes Zerzura as a whitewashed city of the desert on whose gate is carved a bird. The treasure seeker is advised to “take with your hand the key in the beak of the bird, then open the door of the city. Enter, and there you will find great riches….”

Among the famous explorers of the Libyan Desert is Gerhard Rohlfs. The German explorer , with backing from the Khedive of Egypt , crossed the Great Sand Sea in 1873. Harding King , made a series of camel journeys between Dakhla and Farafra just before the WWI. It was him and Wilkinson who recorded legends of lost oases located deep in the desert , including the famous ‘Zarzura’ oasis, a mythical place with hidden treasures. Legend also spoke of ‘black raiders’ occasionally attacking the Egyptian oases from the west , and then disappearing west again. Finds of pottery jars in 1918 near Dakhla supported the belief that the legendary places do exist.
Yet , the first major expedition into the heart of the vast desert was made by Ahmed Hassanein Bey, an Oxford educated Egyptian of Bedouin origin. In autumn of 1923 with the permission of the Senussi leadership he followed local rumors of ‘lost oases’. Hassanein was the first to report of rock engravings “of great antiquity” at Karkur Talh, the northern valley of Uweinat.

Prince Kemal el-Din was a pioneer and he was the first to reach Uweinat by motor car. He named the plateau Gilf Kebir (great wall). The prince also found some rock paintings alongside the engravings at Uweinat. His scientific publications raised the interest of the outside world. In the late twenties and early thirties most of the unknown territory was traversed and mapped by a handful of explorers.
Ralph Bagnold, and Kennedy Shaw, both British officers, László Almásy, a Hungarian gentleman-adventurer, and Patrick A. Clayton, of the Desert survey, all took their part. Bagnold and Almásy were the first ones to venture with ordinary motor cars into the deep desert in 1929 and explored the hitherto unexplored section of the Darb el Arbain. Almásy discovered painted ‘caves’ at the base of the cliff in the western Gilf Kebir, at Wadi Sura (the “Valley of Pictures”), among them the now famous figures of the “swimmers”. Bagnold successfully conquered the Sand Sea in 1930. In the mean time Clayton and the Desert Survey was extending systematic mapping of the western desert.

After the WWII war the western desert became quiet again. In 1968-69 a Belgian expedition discovered a large number of unknown prehistoric paintings in the upper reaches of Karkur Talh at Uweinat and the Gilf Kebir. Since the eighties the Heinrich Barth Institute of the University of Cologne carried out ongoing archaeological and geological work in the Gilf Kebir area.

Here is some of our programs,

This site uses Akismet to reduce spam. Learn how your comment data is processed.